This article appeared in the July 2012 edition of Testing Planet, which is published by the wonderful Ministry of Testing, one of the most exciting developments in software testing over the last 20 years.

The article was written in June 2012, but I don’t think it has dated. It’s about the way we think and work with other people.

These are timeless problems. The idea behind E-prime is particularly interesting. Dispensing with the verb “to be” isn’t something to get obsessive or ideological about, but testers should be aware of the important distinction between the way something is and the way it behaves. The original article had only four references so I have checked them, converted them to hyperlinks, and changing the link to Lera Boroditsky’s paper to a link to her TED talk on the same subject. 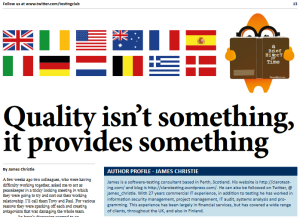 A few weeks ago two colleagues, who were having difficulty working together, asked me to act as peacekeeper in a tricky looking meeting in which they were going to try and sort out their working relationship. I’ll call them Tony and Paul. For various reasons they were sparking off each and creating antagonism that was damaging the whole team.

An hour’s discussion seemed to go reasonably well; Tony talking loudly and passionately, while Paul spoke calmly and softly. Just as I thought we’d reached an accommodation that would allow us all to work together Tony blurted out, “you are cold and calculating, Paul, that’s the problem”.

Paul reacted as if he’d been slapped in the face, made his excuses and left the meeting. I then spent another 20 minutes talking Tony through what had happened, before separately speaking to Paul about how we should respond.

I told Tony that if he’d wanted to make the point I’d inferred from his comments, and from the whole meeting, then he should have said “your behaviour and attitude towards me throughout this meeting, and when we work together, strike me as cold and calculating, and that makes me very uncomfortable”.

“But I meant that!”, Tony replied. Sadly, he hadn’t said that. Paul had heard the actual words and reacted to them, rather than applying the more dispassionate analysis I had used as an observer. Paul meanwhile found Tony’s exuberant volatility disconcerting, and responded to him in a very studied and measured style that unsettled Tony.

Tony committed two sins. Firstly, he didn’t acknowledge the two way nature of the problem. It should have been about how he reacted to Paul, rather than trying to dump all the responsibility onto Paul.

Secondly, he said that Paul is cold and calculating, rather than acting in a way Tony found cold, and calculating at a certain time, in certain circumstances.

I think we’d all see a huge difference between being “something”, and behaving in a “something” way at a certain time, in a certain situation. The verb “to be” gives us this problem. It can mean, and suggest, many different things and can create fog where we need clarity.

Some languages, such as Spanish, maintain a useful distinction between different forms of “to be” depending on whether one is talking about something’s identity or just a temporary attribute or state.

The way we think obviously shapes the language we speak, but increasingly scientists are becoming aware of how the language we use shapes the way that we think. [See this 2017 TED talk, “How Language Shapes Thought”, by Lera Boroditsky]

The problem we have with “to be” has great relevance to testers. I don’t just mean treating people properly, however much importance we rightly attach to working successfully with others. More than that, if we shy away from “to be” then it helps us think more carefully and constructively as testers.

This topic has stretched bigger brains than mine, in the fields of philosophy, psychology and linguistics. Just google “general semantics” if you want to give your brain a brisk workout. You might find it tough stuff, but I don’t think you have to master the underlying concept to benefit from its lessons.

Don’t think of it as intellectual navel gazing. All this deep thought has produced some fascinating results, in particular something called E-prime, a form of English that totally dispenses with “to be” in all its forms; no “I am”, “it is”, or “you are”. Users of E-prime don’t simply replace the verb with an alternative. That doesn’t work. It forces you to think and articulate more clearly what you want to say. [See this classic paper by Kellogg, “Speaking in E-prime” PDF, opens in new tab].

“The banana is yellow” becomes “the banana looks yellow”, which starts to change the meaning. “Banana” and “yellow” are not synonyms. The banana’s yellowness becomes apparent only because I am looking at it, and once we introduce the observer we can acknowledge that the banana appears yellow to us now. Tomorrow the banana might appear brown to me as it ripens. Last week it would have looked green.

You probably wouldn’t disagree with any of that, but you might regard it as a bit abstract and pointless. However, shunning “to be” helps us to think more clearly about the products we test, and the information that we report. E-prime therefore has great practical benefits.

“Quality is value to some person”.

Weinburg’s definition reflects some of the clarity of thought that E-prime requires, though he has watered it down somewhat to produce a snappy aphorism. The definition needs to go further, and “is” has to go!

Weinburg makes the crucial point that we must not regard quality as some intrinsic, absolute attribute. It arises from the value it provides to some person. Once you start thinking along those lines you naturally move on to realising that quality provides value to some person, at some moment in time, in a certain context.

Thinking and communicating in E-prime stops us making sweeping, absolute statements. We can’t say “this feature is confusing”. We have to use a more valuable construction such as “this feature confused me”. But we’re just starting. Once we drop the final, total condemnation of saying the feature is confusing, and admit our own involvement, it becomes more natural to think about and explain the reasons. “This feature confused me … when I did … because of …”.

Making the observer, the time and the context explicit help us by limiting or exposing hidden assumptions. We might or might not find these assumptions valid, but we need to test them, and we need to know about them so we understand what we are really learning as we test the product.

E-prime fits neatly with the scientific method and with the provisional and experimental nature of good testing. Results aren’t true or false. The evidence we gather matches our hypothesis, and therefore gives us greater confidence in our knowledge of the product, or it fails to match up and makes us reconsider what we thought we knew. [See this classic paper by Kellogg & Bourland, “Working with E-prime – some practical notes” PDF, opens in new tab].

Scientific method cannot be accommodated in traditional script-driven testing, which reflects a linear, binary, illusory worldview, pretending to be absolute. It tries to deal in right and wrong, pass and fail, true and false. Such an approach fits in neatly with traditional development techniques which fetishise the rigours of project management, rather than the rigours of the scientific method. 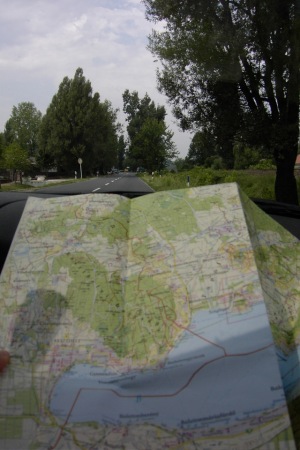 This takes us back to general semantics, which coined the well known maxim that the map is not the territory. Reality and our attempts to model and describe it differ fundamentally from each other. We must not confuse them. Traditional techniques fail largely because they confuse the map with the territory. [See this “Less Wrong” blog post].

In attempting to navigate their way through a complex landscape, exponents of traditional techniques seek the comfort of a map that turns messy, confusing reality into something they can understand and that offers the illusion of being manageable. However, they are managing the process, not the underlying real work. The plan is not the work. The requirements specification is not the requirements. The map is not the territory.

Adopting E-prime in our thinking and communication will probably just make us look like the pedantic awkward squad on a traditional project. But on agile or lean developments E-prime comes into its own. Testers must contribute constructively, constantly, and above all, early. E-prime helps us in all of this. It makes us clarify our thoughts and helps us understand that we gain knowledge provisionally, incrementally and never with absolute certainty.

I was not consciously deploying E-prime during and after the fractious meeting I described earlier. But I had absorbed the precepts sufficiently to instinctively realise that I had two problems; Tony’s response to Paul’s behaviour, and Paul’s response to Tony’s outburst. I really didn’t see it as a matter of “uh oh – Tony is stupid”.

E-prime purists will look askance at my failure to eliminate all forms of “to be” in this article. I checked my writing to ensure that I’ve written what I meant to, and said only what I can justify. Question your use of the verb, and weed out those hidden assumptions and sweeping, absolute statements that close down thought, rather than opening it up. Don’t think you have to be obsessive about it. As far as I am concerned, that would be silly!